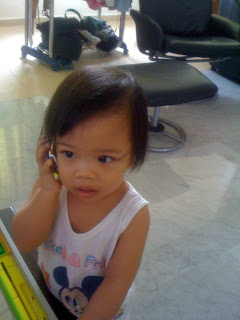 The Small one spent a larger part of the day with Dad (me) yesterday.  Seemed that she wanted me even though Por Por (MIL) was there. So the Small One hung around me. She kept asking me to o to the "computa" for "Boom Boom." Translated she wants to watch me play BeJeweled Blitz!!  It was either this or "Sair Stree" (Sesame Street) videos online. I kept her off coz we (E and me) agreed that she only gets 1/2 hour of online vidz at a given time of day.
After that it was "Dad this" "dad that(practically everything)."  I get dressed, she wants to go out with me. Eventually, I took her with me to run that errand for the Big One. That's how E. ended with the status : "took leave only to find the house is empty ... " =P
The rest of the day was watching and trying to keep the Small One away from mom. It was so amusing to see her pick up her Xia Xia old toy phone (and now hers) and carrying out a "conversation" which mimicked her Por Por.
Scribe : Cracked Jar at 9:28 AM Links to this post

If your daughter goes to this school

Had to follow my own advice more recently. I been always telling new staff that the things in pantry go by one rule: no name means anyone can use or eat. Then one day I received a mug from my Big One's school: 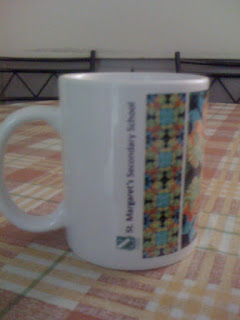 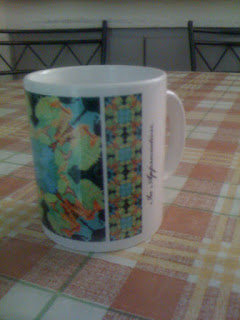 Left it for use at work (and forgot to tag it). :P A few days later it went missing! After some searching... I found it! Between the lips of Jennifer Heng. Argh! Then again it went missing, this time Elaine! Why two ladies. Is it becos it's a mug from a girls' school? In the end I tagged my mug to make sure that at least I got to use it. :-D 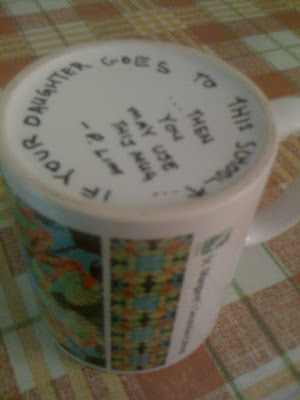 But I didn't want to be too selfish.
Scribe : Cracked Jar at 3:50 PM Links to this post

Wednesday Parent's Devo -- The Night Before

Gosh Like How am I suppose link Living your dreams to graciousness? So I dropped the dreams and picked up graciousness. The amazing thing was that 3 weeks ago when I first started to prep for the Devo, I decided to look in a 365 day devotion book and see what was on 29th July. Lo and behold it was Romans 12:17 which essentially says live peaceably with everyone. Initially, I couldn't figure how to run with this thought. When I got the call, that reference came back to mind, so I decided to revisit it.

Got writer's block at 6p.m. and decided to finish it up when I get home. That was a no go. The Big One was use the Mac most of the time and the Small One wanted my attention the rest of the time. Hit the sack at 10p.m., asked God for inspiration and planned to get up between 4.30-5.00 a.m. to rush the devo out. Really running it thin this time. zzzZZZzzz Woke up at 2.45AM with like this idea in my head so spent the next hour or so banging it out on the keyboard. Printed it out and whwn bavk to bed at 4.00AM . Here is a summary of it.

Romans 17-19 Don't hit back; discover beauty in everyone. If you've got it in you, get along with everybody. Don't insist on getting even; that's not for you to do. "I'll do the judging," says God. "I'll take care of it."

How do we live peaceably? How do you get along with EVERYONE
We learn it is the HARD way but is worth it:
Hold Loosely on to things. Value people more importantly than things. look at want you have as a privilege you've been given and not aright that you deserve
Act justly, being fair and honest in dealing with others. That is, to make friends not enemies of the people around you. Admit your failing and faults.
Respond Kindly. A harsh word stirs up anger but a soft answer turns away wrath. Be gracious when others fail (in keeping promises or doing things) remembering that you too have failed. Be giving and forgiving, just as you would want to be and have been forgiven. Look for the gem and jewels in other people.
Decide Daily to live peaceably with others. Don't worry if others are not doing the same. "If possible as much as it depends on you" Living peaceably depends as much on you as it does on others. THen you would begin to change the atmosphere around you.

What do you know there I am struggling through the devo trying to carve out a script on the dreams thingie. I'm almost there when at 5 o'clock yesterday evening I receive call from a teacher from SMSS.
Seems there's a group of girls doing a video project on graciousness in the school covering different areas in the school including parent involvement. So could i please speak on that topic?
Scribe : Cracked Jar at 10:49 AM Links to this post

Thinking of what to do for devotion on Wednesday morning ... What can I say in ten minutes that will guide the girls' thoughts for the day?

Sue Lynn suggested telling them that Daddy Loves them.
And there's the verse about living peaceably with everyone.
Then there's this :
Don't live other people's unfulfilled dreams.
Either make their dreams yours or make your dreams theirs.
Whatever the case Live Your Dreams.
Scribe : Cracked Jar at 10:58 AM Links to this post

I have to iron out which Ironing board to get .....

ANYone Out there! Can you help me please? Do I get something like this or ..... 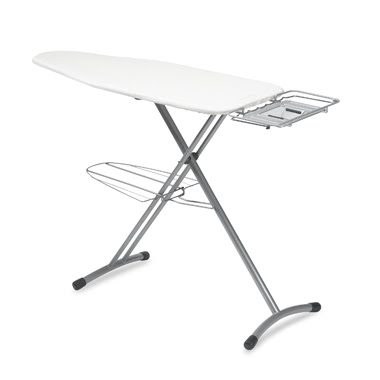 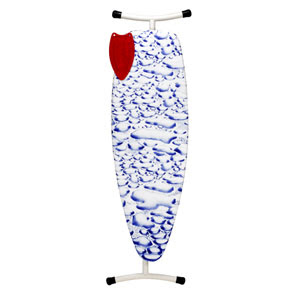 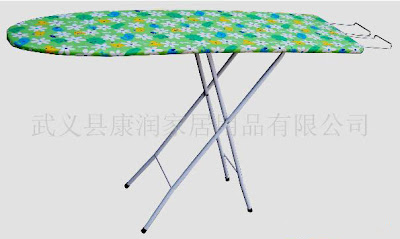 What a Band-Aid can do - Remembering Friends

Just found this when I was clearing stuff in the office. A band aid with a note written on it. An old friend and an old memory of a time when I was a mentor to some young people. 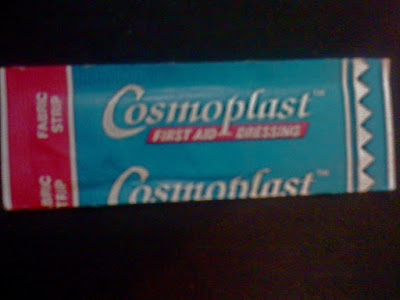 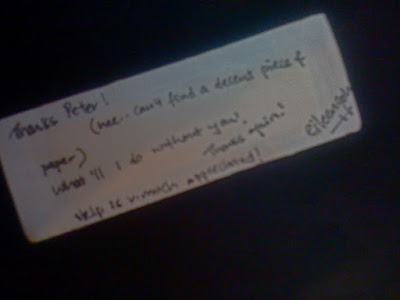 It' been years since I seen them and suddenly I reconnecting with them over Facebook. One is even doing the new design for the Church web site. It's just so good to know.
Elaine the young lady, that wrote the note, is serving with her husband in Sweden. Then there's Debbie the children pastor. Sometimes E. doesn't like me reminiscing about the past or reminding them about it. Why bring up the past for, why drag it out? I dunno maybe I'm sentiment or something.
Scribe : Cracked Jar at 10:01 AM Links to this post

So what does a dishonest man look like or does Clothes a man make??

Benny Yap, the missing boss of two recently de-registered private schools that are currently under investigation; Benny Yap was described to be by employees to "cut a smart figure, was always well-dressed. The red Ferrari that he drove cemented his image as a successful businessman." - The Straits Times, 18 July 2009. The Strait Times goes on to report one of the employees saying: "This tells us that you don't have to look like a dishonest person to be one."

SO ... what does a dishonest person look like? Seems to me that the statement made seems to imply that : If you look good dress well then it follows that you are a person of good character. Gosh IF we as Singaporeans (with one of the best education systems) have come to judge a person only by the clothes that he wears and the car that he drives THAN perhaps we have educated ourself to imbecility.
Scribe : Cracked Jar at 12:27 PM Links to this post

Sometimes I still don't get it. The education system in Singapore is lauded as one of the best.

We (the minister or powers that be) keep saying that we want to move away from just studying to get a piece of paper to develop a culture of lifelong learning. I have one problem with this ... we have a whole bunch of people that short circuit this process. They're called parents. Before I get crucified or stoned to death, let's be made apparent that I'm a parent too. Not just parents but almost everywhere, the govt. has created a culture of meritocracy. Which is not bad in principle - people ought to be given recognition, promotion, reward based on the merit of their performance at work. In practice however, it translates to getting As for your exam cos only then the good school will take you in. Merit has become academic merit period. The focus is always on passing exams well. So much so that 75% pass is a FAIL cos you fail to get in to the school that requires 95% pass. Students are no longer excellent because it is a good trait to have, they are excellent cos of a specific benefit. It what they can get out of it.

Cracked Jar
I am an Armchair Philosopher, who's a husband to one lovely lady, a father of two beautiful girls, an owner of three cool iDevices (four actually but who's counting :p) and a follower of One Awesome God

Da Verse of the Day

The views expressed on this blog site are the author's and the author's alone They do not reflect the views of his employer or any organization with which he is affiliated.